He says he feels disappointed as an American citizen because every year it is hoped that the US will come to the talks with a strong position on tackling climate change but this has not been the case.

He says following the transition from the George W. Bush administration to the Barack Obama administration there was a significant degree of expectation in the Conference of Parties (COP) in Copenhagen in 2009.

However, the Obama administration has been constrained by both the US Senate and the Byrd-Hagel Resolution, the latter of which was passed in 1997 to prevent the US from agreeing to binding commitments unless China and India also agreed to the same commitments in the same period.

He says because of these reasons, the US legislature has had a marginal role in the US on the issue of climate change.

He says he wishes the US government could do more in the areas of climate finance.

However he says that the level of interest among US students has been rising: Brown University brought 10 students to COP 19 and also saw great engagement on the issue of divestment from fossil fuels recently. 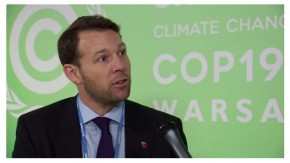