He says climate change threatens the livelihoods of many in the Pacific, which is home to three of the lowest countries on Earth.

Sheppard says the prospect of migration, although a worst case scenario, is extremely sensitive.

He says, although Pacific countries contribute only 0.3% to the world’s emissions, they are not deterred from taking action. SPREP, for example, is focussing its efforts on practical adaptation measures and is also looking into the areas of food security and coastal management in the region.

On the topic of loss and damage, he says the message of Small Island States is clear: livelihoods are at stake and a part of the response to tackling this will be through loss and damage mechanisms. He says urgent action is needed. 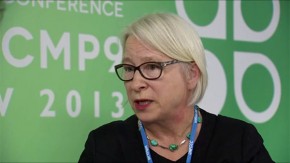