COP19 (20/11/13) – Yvo de Boer, Special Global Advisor on Climate Change and Sustainability at KPMG, says that although he is fed up of roadmaps upon roadmaps but is hopeful this COP will deliver the final roadmap on how to reach a climate agreement by 2015.

He believes national binding agreements are better than global treaties because national laws are easier to enforce than international ones.

He says an international treaty would provide investors with much needed policy certainty, but if these agreements had been translated into laws, when Canada left the Kyoto agreement for example, there may have been some consequences to its actions.

He says these negotiations are struggling because there are many political, emotional and economic issues in need of debate.

Even in an optimistic scenario, de Boer does not believe countries will commit to targets to avoid the 2degC temperature increase.

Developed nations are not willing to accept responsibility for historical CO2, for which developing nations are asking for reparations to be paid.

De Boer attributes the fact the negotiations are struggling on topics like loss and damage, because it could be quite expensive for developed countries to give money to developing nations.

He says, if industrialised countries don’t respond to these concerns, it could derail negotiations. 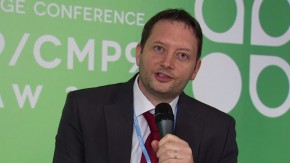